Have you ever experienced playing two identical instruments and note a difference in tone? Maybe one having a fat and lively tone and the other sounding more neutral and weak despite the fact it is the same wood and model?

This difference belongs to the wood of the neck and to the way it "supports" the strings vibration.

On 99% of the guitars and basses you will test and play, the matching of the woods which compose the body and the neck is randomly made. You will be surprised to learn that it is possible to forecast the tone an instrument will deliver and tune it to our needs and taste by pre-selecting the wood used for the neck (or the neck itself if we are assembling an instrument) in order to achieve a superior sounding instrument that will tear the other's apart. 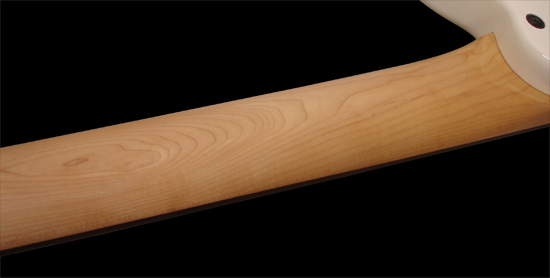 Canadian hard rock maple bass neck.
The neck is the most important part of an instrument.


On the instruments where the neck is not preselected the contribution of the wood to the sound is generic and the overall tone mostly comes from the pickup and the hardware: this doesn't mean these instruments sound bad. Not at all. They simply sound normal. They do not have us WOWING.


Today we will see how to recognize and select superior timber woods for our instrument to achieve the finest tone possible. To do this we will use the Frudua tapping technique. THE TAPPING TECHNIQUE

NB: before you proceed we recommend you read this article.

As skilled luthiers we should stock all the necks and body blanks cut to the same sizes, paying attention that we left some margin for the wood to move while drying. For example for a strat body blank (44.4mm) we will cut it to 50mm, for a strat style neck (20mm) we will cut to at least 25mm). Then we need to proceed as follows:

Take a neck's blank and hold it with one hand between your thumb and index finger in one of the upper corners and gently beat with your other hand middle finger knuckle at the centre of the blank to about 2/3 of its length from the top. You can also move the knocking to find the point where the wood resonates at its best. If you are working on a complete neck, hold it from the upper tuner hole and beat in the middle/lower part of the rear contour. 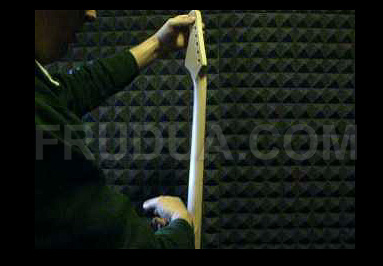 If it's a body (unfinished no hardware) hold it with a hand on the
outer point of the longer cutaway and tap near the
bridge area on the opposite side of the circuitry. 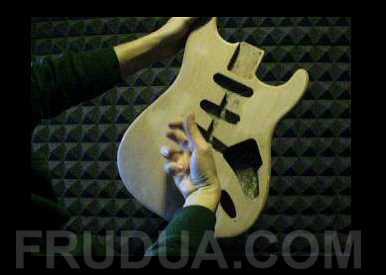 The tapping technique requires a trained ear and capturing the subtle differences may be hard in the beginning.

To practice you can go to a luthier workshop and ask him if, to help your training, he will allow you to tap the various necks and bodies, or body and neck blanks he has available (be careful they are of the same type and size).

When purchasing a replacement neck try to shop where there are many parts available so you can choose among them the one which resonates better.

There are two factors we must pay attention to when tapping:
1) the note pitch,
2) the note sustain and decay.

What we are looking for is a low note with a sort of "bell" effect where the tone is highly resonant and decay is longer.

Both these factors are responsible for differences in overall instrument tone.

- The note pitch will give us the idea of the depth of the tone and the volume we will have on the finished instrument.
- The note decay will deliver information on the ability of the wood to deliver sustain and note definition.


TAPPING THE ELECTRIC GUITAR
The following is an example of the average neck tone at tapping. This is the tapping tone of the necks you'll find on 90% of the guitars you will play. The wood this neck is made of does not strongly contribute to the instrument tone. Listen

This is an example of what we are looking for: tapping this neck produces a deep tone (about an octave under the previous one) and a good sustain (even if not 100% perfect). This neck will contribute to the guitar tone by producing a complex tone, rich of volume, well defined and with a good sustain. Listen


Following you will find a series of MP3 files which shows the different tones you may find when tapping a neck. You can use them as a reference for training your ear.


NOTE: we suggest you use the headphones or a good hi fi system to listen to the files as the bass frequencies here are as important as higher ones.

HI PITCHED TAPPING TONE
This is the most common choice. The necks we will find on 90% of the instruments we will encounter.
1) This is the typical hi pitched tapping tone. This neck will produce a normal tone. Not bad but not hi quality. Note is hi pitched. Please also note how the tone is missing low frequencies compared to the following examples. Listen
2) Another hi pitched neck at tapping. There are some subtle differences in respect to the previous one though. The tone is a bit deeper (bodied), some more lows are there. Still a common neck but slightly better than the previous one. Listen
3) Another neck belonging to the "hi pitched" family but a bit lower pitched than the previous two, and featuring some more sustain and resonance. Still common, but the best of the three Listen

LOW PITCHED TAPPING TONE
These are the best necks. Once assembled on a guitar they will deliver a full, rich and resonant tone with good sustain and volume. They are pretty hard to find.

9) A pretty low pitched neck with a pretty good sustain. This is still a fine neck. Listen
10) An even more deeper tone then the previous one will produce a lot of volume and depth on the notes. We regret the sustain which might have been better. Listen

DEAF SOUNDING NECKS
A neck may sound deaf at tapping for many different reasons among which can be an improper truss rod installation, or even simply how the truss rod is adjusted at a given moment. (read). A loose truss rod could vibrate in phase with the neck and absorb some of the strings vibration thus inhibiting sustain. Here are some examples of necks displaying truss rod problems. 11) A bass neck with a double expanding loose truss rod in resting position. Note the amount of vibrations the neck shows when tapped. Listen
12) Same truss rod with truss rod in tension. The internal vibration is reduced. Listen
13) Yet another neck, this time a guitar one, with a single action truss rod (completely loose resting position). Note the huge amount of vibrations inside the neck. Listen

TAPPING: DIFFERENCES BETWEEN BASS AND GUITAR
Once we have learnt to recognize the different kinds of tapping sounds, we need to distinguish between guitars and basses. In the case of a bass, our task is to move the resonant peak of the instrument away from that of the strings to leave the strings vibration unaltered.

On a neck through bass this is achieved by laminating the neck with different hard woods so the resonance raises as a sum of all resonant peaks of the various woods. Once we have done that we will fine tune the tone using different woods for the side wings which form upon the body of the instrument.

On a bolt on bass this is not possible as we only have two woods: one for the neck and one for the body. This will force us to some kind of compromise.

By using hard and dense woods for both the body and neck, we will raise the resonant peak of the instrument and will increase sustain and avoid "dead" notes. This kind of design will generate a less comfortable instrument (weight) and a tone missing some of the fatness we look for in a bass.

On the other hand, if we want to achieve a deep and fat bass tone, we will have to choose a neck (or a neck blank) sporting a deep pitched and sustaining tone at tapping but then it is possible that somewhere on the fretboard some dead notes will appear.

So what's the solution here?

As you probably understood, there's no solution for a bolt on bass. On a bolt on bass either we will get a wonderful deep and resonant tone with some note vibration fault or we will go for a common tone and zero vibrations fault.

Here is explained why most of the best sounding bolt on basses, delivering a deep fat tone always feature some vibration problems on the neck.

On an electric guitar the interaction between the wood resonance and the instruments resonance is different than on a bass and this assists us. First of all the strings resonate far from the instrument's resonance peak especially the higher notes we use for soloing meaning that the period of the vibration is very narrow so any interference is difficult to be heard.

This means that on the electric guitar we will not encounter the same problems we may notice on the electric bass and the above mentioned compromise is basically solved. The result is that the best electric guitar will be:
- a neck through guitar with the neck built in 3 pieces of very resonant hard rock maple and the side wings built in one piece of highly resonant wood like alder, mahogany or also basswood.
Or a bolt on guitar where the neck wood has been selected using the tapping technique illustrated above and a body in alder swamp ash, mahogany or basswood. 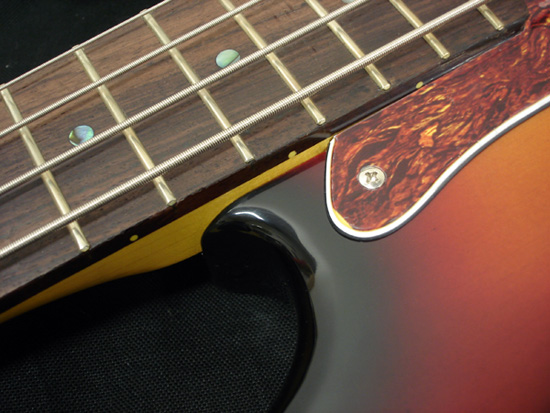 On a bolt on bass we only find two kind of woods: one for
the neck and one for the body.


TAPPING TOP PLATES
A top plate (or tone plate) is a portion of wood (usually an exotic one) in which thickness might range from 7 to 15mm, which is glued on top of a guitar or bass body made of neutral tone wood, like alder or mahogany, to fine tune it to a specific tone and frequency response. 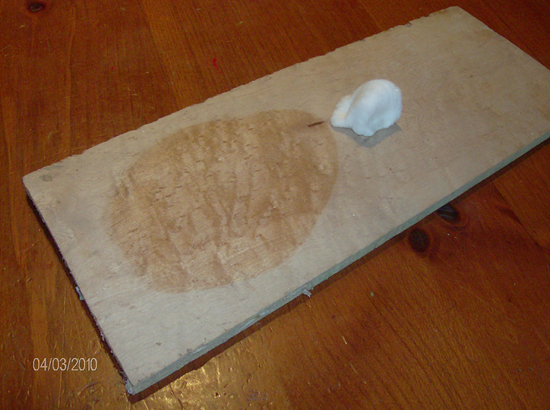 
As said previously, our task on the electric bass is to move the instrument's resonant peak over the one of the strings and therefore produce a better, and the purest string vibration.

This can be achieved by carefully selecting the wood the neck is made of, and on the NECK THROUGH basses by laminating side wing woods to fine tune the tone. 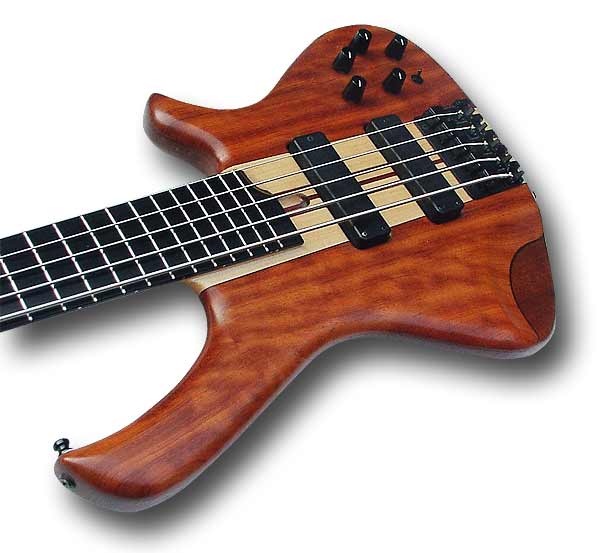 
To do this we will use a core made of a neutral sounding wood like alder and mahogany but also basswood and harder and denser exotic woods the likes of cocobolo, bocote, ziricote, zebrano ebony, wenge, and paduak, mainly used for fretboards and also bubinga to match this neutral core in order to "equalize" the tone to our taste.

During my last 30 years I have been experimenting with neck through bass constructions and various woods. For a list of the best wood combinations I would suggest, you can read this article.

FINISH and TAPPING
Whatever finish you're going to apply to an instrument will finally have the result of increasing its resonant peak. Please read here: guitar finishes.

As a luthier and lutherie teacher, since 1988 he has been making about 350 boutique guitars and basses priced from 2,900 to 5,600 Euros and repaired and customized thousands of string instruments. His instruments and amplifiers are used by flagship artists, such as Chick Corea, Peter Gabriel, Ennio Morricone, Carl Verheyen. He owns two YouTube channels—where he teaches music—that count up to 25+ million views and almost 140.000 subscribers.