In order to correctly accommodate the vibration of the string that takes on an elliptical shape when playing, each neck must have at least a slight concave curvature. For this reason, each neck is equipped with a steel rod (truss rod) inside, able to adjust the relief.


Until the '90s and still today on some of the most valuable instruments, necks were equipped with a single-expansion rod. A tense single-expansion neck rod can only counterbalance the tension of the strings on the neck by bending it in a convex direction.

A double action or double action truss rod is a device inserted inside the neck, capable of recreating a concave or convex curvature on the fingerboard, independent of string pull.

The material with which the truss rod is made and the way in which it is mounted inside the neck have an influence on the resonance of the neck itself. Usually the more wood you need to remove to insert the truss rod, the less sound will remain in the neck.

Another important and much underestimated factor is the relationship between the tension of the truss rod and the curvature of the neck with the strings under tension.

Have you ever experienced strange vibrations inside the neck and a dull sound on your instrument?

A neck that takes on an appropriate curvature with the truss rod completely slow could manifest sympathetic vibrations inside interfering with the vibration of the string. By making sure that the truss rod is slightly pulled with the strings at the right tension, unwanted vibrations will be avoided and the neck will be stiffer and less bending for the sake of stability and sustain.

Modern double-expansion truss rods have a minimum portion of the neck wood removed for installation and are wrapped in a thermo-stringent sheath.

This sheath not only protects the truss rod threads from glue that could block them when gluing the fingerboard, but also prevents unwanted vibrations between the two steel bars that could compromise the sound.

Truss rod adjustment: adjusting the truss rod. In this video Galeazzo Frudua explains in details
how to adjust the truss rod on your guitar or bass to achieve a comfortable action. 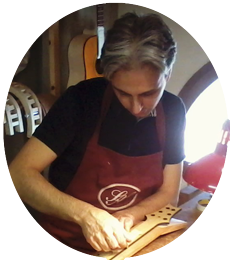 As a luthier and guitar making and repair teacher, since 1988 he has built making more than 350 boutique guitars and basses priced from 2,900 to 5,600 Euros and repaired and customized thousands of stringed instruments. His instruments and amplifiers are used by flagship artists, such as Chick Corea, Peter Gabriel, Ennio Morricone, Carl Verheyen. He owns two YouTube channels—where he teaches music—that count up to 40 millions views and almost 200.000 subscribers.