When a string is plucked and begins to vibrate, the interference caused by the vibration in the magnetic field of the pickup causes changes in the energy flux passing through the pickup. The energy passes from the guitar to the amp, from there to the speakers and at last to our ear, where it becomes a sound.

The resulted sound depends on the placement of the pickups along the vibration pattern of the string (scale).

If we play an open E, we will note that the string is firm at the sides and that the maximum point of vibration is its half. This note is called the "tonic" or "fundamental harmonic" and is characterized by the lowest sound and highest volume.

The second harmonic, for example, is nothing more than the fundamental divided into two parts that correspond to the first octave. This has a node in the centre of the string (the harmonic that we normally use to tune the octaves).

The most audible and vibrating points of this harmonics (antinodes) are positioned, in turn, halfway between the anchor points of the string and the node, i.e. at 1/4 and 3/4 of the total length of the string itself.

The third harmonic divides the string into 3 parts with nodes at 1/3, 2/3 and so on ad infinitum. 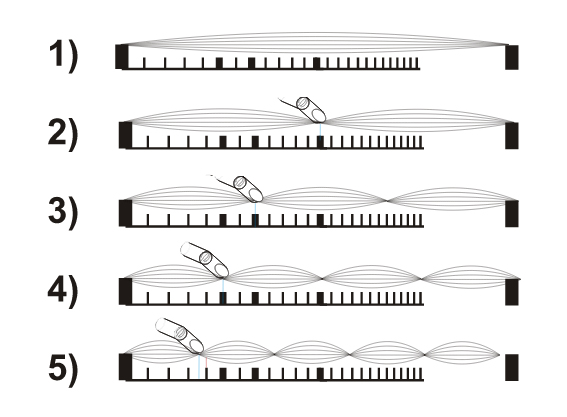 
It is important to understand that the sound of that string is NOT ONLY made by the fundamental, but also by all the subsequent partial harmonics that vibrate at the same time.

Now you know why Leo Fender tilted the Telecaster and Stratocaster bridge pickup slightly towards the neck from the bass side.

You may have noticed that the same instrument in the hands of different guitarists or bassists sounds different. This phenomenon is due in part (especially on the electric bass) to where the guitarist is used to plucking the string, so to stimulate the fundamental note rather than specific partial harmonics.

As the master piano builders teach, the best place to pluck the string along its extension (scale) is between one seventh and one sixth of its length (more or less where the central Stratocaster pickup is placed).

This position actually offers the maximum compromise between the full-bodied sound of the fundamental and the attack, combined with the brightness of the partial harmonics.