Among the physical properties of wood, we are more interested with what concerns for tone we have:


1) Stiffness (elasticity coefficient along the grain). This is more important for acoustic guitars and violin top construction,
2) wood density (i.e. coefficient of propagation of sound inside wood),
3) Internal friction (attitude of a material to dampen the energy which we apply to wood here).

Maple is by far the best wood for what concerns density/stiffness ratio and is the most used wood for electric bass and guitar construction, especially necks. Maple's performance is only surpassed by spruce, which actually is not as stiff so it can't be used in neck construction.

There are different families of maple used in guitar construction:


The beautiful figure of the curly, birdseye and quilt maple tops are the result of a genetical illness of the tree, of which origins are still unknown. Figured maples are beautiful to see but, due to their weird grain structure and figure they are less stable than plain maple so it's use for neck building is not recommended and there isn't any direct relationship between the marvellous look and the tone of those woods.

The density and stiffness of maple produces a bright and articulated tone with a good attack and a very good sustain.

The use of maple for the body is not common, even if in the past we have seen good sounding instruments made in quilted maple and European flame maple. In case you mean to use a maple body we highly recommend softer species (European) and a deep sounding neck at tapping.

Due to its stiffness and therefore stability, hard rock maple (Acer saccharum/Nigrum) has become the main wood for building bass and guitar necks, bolt on or neck through since Leo Fender introduced it in larger scale production in 1954 on the Telecaster. It is actually matched with fretboards made in maple, Indian rosewood, ebony and less frequently in other kinds of exotic woods.

Necks made in curly, flame and birdseye maple tend to be less stable than plain maple necks. This is due to the irregular grain pattern which is responsible for the beauty of these woods. Even more care in seasoning is consequently recommended.


FRETBOARDS
The use of maple for fretboards produces accentuated highs and mids with good volume, enhancing tone "liveliless" which makes your tone on a solo stand out of the groove. Maple is ideal on guitars made with neutral body woods like mahogany or basswood or more in general to brighten the tone and add definition.

TOPS
Maple is often used for "tops" layers of wood which may vary from a very thin 0.7mm veneer, to 6-7mm thick drop tops, to 10-18mm thick wonderful figured tops which are glued onto the guitar body and then carved to add brightness and a sharper attack to more neutral woods like mahogany, alder and basswoods.

COLOUR/FINISHING
The beautiful maple figure and the clear creamy colour makes maple very suitable for wonderful 3-dimensional finishes applied with anilines. The use of maple for fretboards requires the wood to be treated with hard finishes like urethane or acrylic to preserve it's natural colour and protect it from sweat, moisture, dirt, etc. 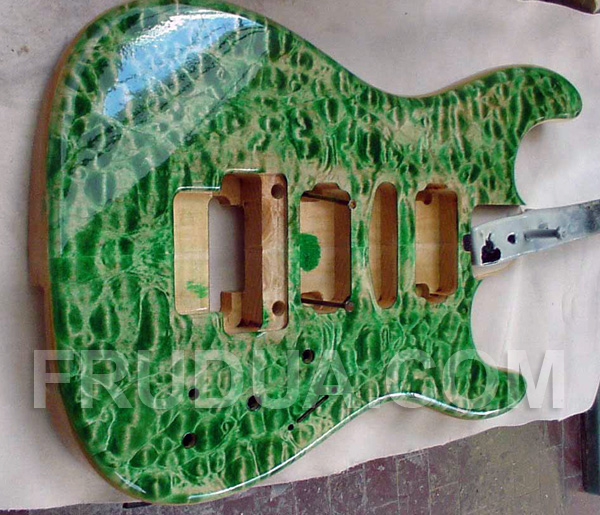