The basic principle of how the material with which an instrument is made influences its sustain can be stated as follows: the more rigid the neck, the lower the absorption of energy and the longer the duration of the vibration of the string.

Moreover, the denser and more rigid the material of which an instrument is made, especially the neck, the more the resonance peak of the wood will shift beyond the frequencies occupied by the strings, which translates (especially on the electric bass) into more defined and flawless notes (less "dead notes", "wolf notes", etc.).

The sustain can be reduced or increased by a number of factors including:

NECK THICKNESS
The thicker, denser and more rigid the neck, the longer it can restore the vibration of the note intact.

Pickup adjustment is so important for the musician (especially for the professional), for the sound, and for the responsiveness of the instrument to touch that during the Frudua setup courses we dedicate an important part of our training to this phase.

NECK CONSTRUCTION
It tends to give the neck through method a higher sustain in the electric guitar. This type of neck is made of various woods glued longitudinally to each other and is often also reinforced by carbon fibre bars because, not being replaceable in case of breakage, the neck must be as durable as possible. This solution stiffens the neck, thus increasing the sustain.

STRING TYPE
Bigger and therefore tighter strings are characterized by a higher sustain.

SCALE LENGTH
With the same string diameter and pitch, the longer the scale, the tighter the string will be and the longer the vibration muffling time will be. Important: with the same string diameter, pitch and scale, the portion of string beyond the nut and over the bridge (and its angle) does NOT affect the string tension but affects the way we perceive the tension in our fingers, for example, by scratching the notes or bending.

Sustain is the ability of a string to sustain its vibration
(pictured Frudua Carved Slave Pentabass).

RIGIDITY OF THE HEADSTOCK
When we pinch the strings on any instrument that has a headstock, the headstock vibrates by absorbing part of the vibration of the strings. For this reason, on many valuable instruments the headstock is reinforced with a "volute", whose purpose is to stiffen the joint between the neck and paddle, increasing the sustain of the notes.

This solution has a significant impact, especially on the electric bass bolt on, in eliminating or reducing the typical dead notes between the 4th and 7th fret on the G. 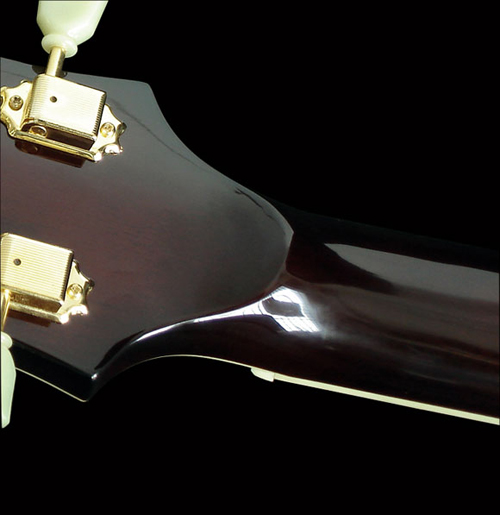 Left groove for correct depth key. On the right are grooves
too deep that weaken the structure of the neck, making it
less rigid and reducing sustain.

TRUSS ROD INSTALLATION
A very important factor for sound and sustain, and often underestimated in the construction of the neck, is the relationship between the tension of the truss rod and the curvature of the neck with the instrument tuned.

Once the strings are mounted and the instrument tuned, the neck must reach its ideal curvature with the truss rod slightly taut. This will help to make the neck more rigid and less bending to the benefit of sustain. This factor also reduces the weak vibrations of the truss rod inside the neck, which can inhibit the correct vibration of the string. Listen to this files:


NECK TO BODY JOINT
Even an imprecise neck/body joint can help limit sustain. In the construction of the neck joint, in addition to the combination of the woods that make up the neck and the body, one must ensure that the transmission of sound is not hindered by the paint and that the neck inside the milling matches perfectly on all sides.