The first one to introduce an electric guitar manufactured to be produced in high mass numbers was Leo Fender back in 1954. This guitar was a bolt on instrument (the neck was bolt to the body and therefore easily removable in case of problems) and was fitted with a maple neck and fretboard. Maple was lately replaced by indian rosewood, it appears for marketing and competition reasons ("The Fender Stratocaster - A.R.Duchossoir.").


After some time Leo Fender realized that the introduction of rosewood, an oily wood, had a negative impact on tone and on the neck stability (the two woods tend to react in different ways to the environmental and climatic changes) so he gradually reduced the rosewood thickness to almost a veneer (2/3mm) till in the 1967 maple fretboards were reintroduced first as a option and finally rosewood was discontinued in 1970.


Today fender offers both the options but only a few of us know the whole story which tell us a lot on the attention to be put into selecting the electric guitar fretboard woods for a maple neck to highly preserve tone and neck stability.

Left to right: first Fender necks were completely built in maple and the
truss rod were inserted from the rear and then covered with a stripe of walnut wood (skunk stripe)
Later on a rosewood fingerboard was introduced.

The rosewood fingerboard thickness was then progressively reduced to 3mm.
Maple was then definitively reintroduced in 1970 as a separate piece of wood.


The most used woods for fretboard construction are:


Occasionally we also see purple heart, bois de rose (most of all on classical instruments) and wenge.

Slots on the fretboard are made using very precise machinery which margin of error ranges around a cent of mm.

After frets are installed on the electric guitar fretboard using a dedicated press or a special hammer into the wood, they are dressed, rounded and polished by hand to ensure the maximum playing comfort and intonation. 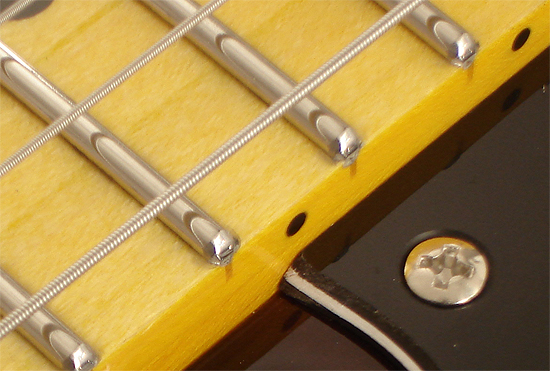 Frets are dressed, rounded and polished by hand for the maximum
playing comfort and intonation over the fretboard.

SOUND
Many are the factors to have an impact one the tone of the wood used for making the fretboard and all of them originate from how the added wood reacts and complements the neck's wood in terms of vibration, stiffness and tone .

HELPFUL TIPS
Reducing the thickness of your fretboard (by leaving more of the maple wood), no matter if it is made of ebony of rosewood, will maintain the playing feel you're after while dramatically improving your tone.