When tuning, you are simply applying tension on the strings until they reach a certain note. The string is built such that it hits the given note at the right tension without breaking. Each string can nominally support around 40% tension, beyond which point it will break.


The string is fixed at two ends: at the bridge and the nut. When it vibrates, the string forms an ellipsis whose max width is half its length, the point that corresponds to the 12th fret on stringed instruments.

The length of the vibrating part of the string is called the “diapason” or “scale”.

Although each string has its own slightly different length, owed to octave compensation, we conventionally tend to define a “scale” or mathematic diapason for every instrument that is the same for every string. This is calculated by doubling the distance between the inside of the nut and the top of the 12th fret.

The most common diapasons are:

Variations in diapason length (scale) influence their tension in turn, the sound, and “feel” on the fretboard.

With the same tuning and string length, the short scale (Gibson) is marked by less tension; a long one (Fender) is characterised by greater tension.

This means that with the same gauge and tuning, the same string will be softer on a Gibson and harder on a Stratocaster.

The strings’ vibration pattern forms an ellipse. The max amplitude
of the string’s vibration occurs above the 12th fret.

TENSION AND FEEL ON THE FRETBOARD

The length, the angle or even the presence or otherwise of these NON-VIBRATING portions of the string do not affect string tension in any way.

The portion of the string not directly involved in the
vibration (in red) can vary, depending on the instrument,
from 15% to 30% of the total, and in no way affects string tension.

For example, reducing the height of a Les Paul tailpiece does not increase the string’s tension. When we lower the tailpiece, the string clearly tends to grow in pitch, but then to bring the string back into tune we will need to loosen the tuners by bringing the string back to its original tension.

That diameter of string (same make and model), on that scale, always corresponds to the same note and the same tension, regardless of what happens beyond the saddles of the bridge and beyond the nut.

It is true, however, that the amount of string (and the angle of incidence of the string itself) beyond the nut and the bridge influences the "perception" of hardness that we have of the string at bending and the attack on the pick all the more we are playing towards the nut or towards the bridge. 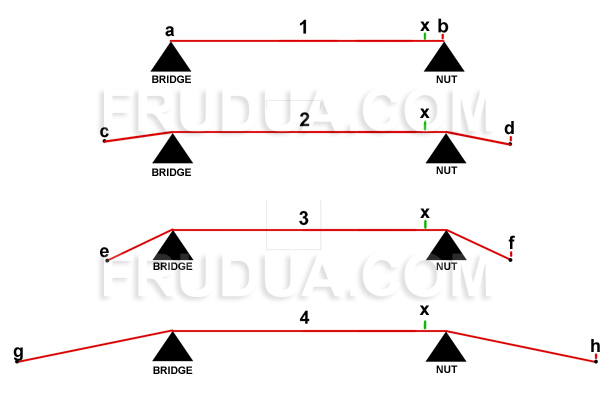 The angle of incidence of the portion of string beyond the
bridge and the nut does not affect string’s tension but
rather the perception of hardness in the strings at bending.


We all know that it is easier to bend a stretched string at the middle than at the ends. The same thing is true of instruments.

The images above show 4 different types of string settings.

Let's suppose that in the green “X” points we apply a bending always equal to two tones.

In image "1" the string is fixed very close to the nut and the bridge. This is the classic Floyd Rose position. In this position, the string's resistance to bending is maximum. If you try bending at the "X" point, the force you apply with your fingers will mainly be dissipated in a portion of the string that goes from "X" to "B". This is one of the four cases where the effort to get to the note you have in mind will be higher.

Figure 2 represents a classic case where the strings extend beyond the nut and bridge, and are fixed, for instance, to the right of the tuners and to the left of a tailpiece. In this case, when applying the same bending, the energy is mainly dissipated in a longer portion of the string (X-D). The tension is the same but we will have the impression that the bending is softer.

Figure 3 shows the same position. The portion of string beyond the nut and beyond the saddles of the bridge (X-F) is the same as in the previous example but this time the angle of incidence is greater, so the bending will be slightly harder than example 2. This is because of the greater friction in the friction points (bridge and nut).

Figure 4 shows a borderline case where the string extends far beyond the nut and over the bridge saddles (G) and over the nut (H) with a very low angle of incidence. The force is dissipated between X and H (a common occurrence on many semiacoustics). In this case, the bending will be softer.

In all the last 3 cases, the lower the friction on the nut and saddles of the bridge the more you will have the feeling of a soft and easy bending.

On the BRIDGE side, increasing the angle of incidence on the saddles will give us the impression of a harder string to pluck even with the plectrum, which translates into a feeling of greater attack. That's why LES PAULS have a height-adjustable string clamp that is independent of the bridge.

Nowadays, this solution allows us to lower the stringlock when playing a more rock genre, where a major attack is important for certain picking techniques, while we can raise the stringlock if we want a softer and sweeter attack, for example to play jazz or Blues. 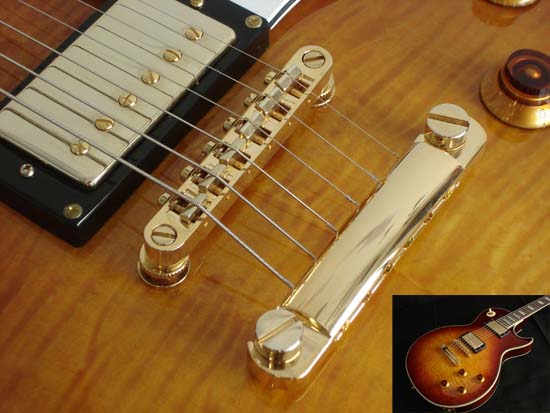 The height of the tailpiece influences the feel of the
strings at touch near the nut and the bridge but not the tension.


DROP TUNING
Many guitarists would like to reach lower notes on their own instruments by adding strings beyond the E, or by using alternative tunings which are much lower than the standard, without sacrificing playability with strings as sticky as treacle.

This problem is solved by changing the string’s very inner structure and the way it is built.

To obtain a stiffer string (less scratching on the fretboard) with the same diameter, it is necessary to increase the diameter of the inner core and reduce that of the outer covering wire. This modification creates a stiffer string, with a lower sound but with a smaller diameter and allows us to comfortably use the various "drop-tunings" that are so fashionable in metal, for example.


HELPFUL TIPS
All the below operations will contribute to a better "feel" on the fretboard: