HOME > Factors that determine how a guitar pickups sounds


FACTORS THAT DETERMINE HOW A GUITAR PICKUPS SOUNDS

A pickup is a transducer consisting of a coil wound around one or more magnets, and which consists of a wire as thin as a hair, insulated with a miniscule layer of insulating paint.

When the string is plucked, it starts to vibrate. By vibrating within the magnetic field of the pickup, it slightly modifies its flow by creating a small amount of alternating current inside the winding.

This current flows from the pickup to the instrument controls and then through the cable to the amplifier and speakers. From here it at last reaches our ears. 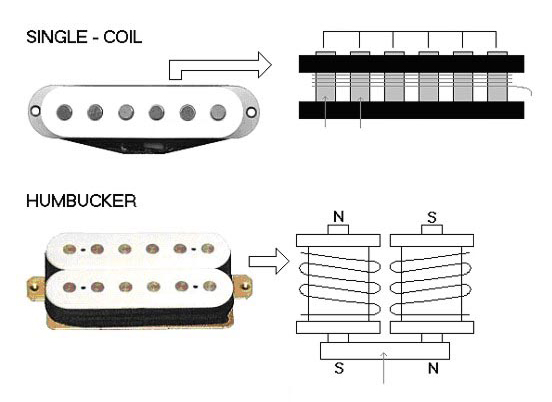 This drawing shows the structures of a single coil pickup and a humbucker pickup.


A single coil pickup consists of a very thin wire coil wound around a number of magnets. The single coil pickup is characterized by a bright and defined sound and a certain character due to the fact that it detects the sound at a specific point of the string.


A humbucker pickup consists of two paired single coil pickups but with the coils magnetically and electrically reversed to each other. In the humbucker, the current turns in the opposite direction inside the two coils and the magnet, which is placed under the coils, is oriented so as to oppositely polarize them.


Since pickups are essentially antennae, it happens that when noise captured by one coil meets that of the other coil, the latter being offset by 180°, one cancels the other (provided that the two coils have the same impedance and magnetic field).

The sound of the humbucker pickup is marked by higher volume and is more calibrated in the mid-bass than that of the single coil, so it is less brilliant.


The difference in tone is due not only to the different electrical structure, but also to the fact that the humbucker picks up a larger portion of string, detecting more harmonics. 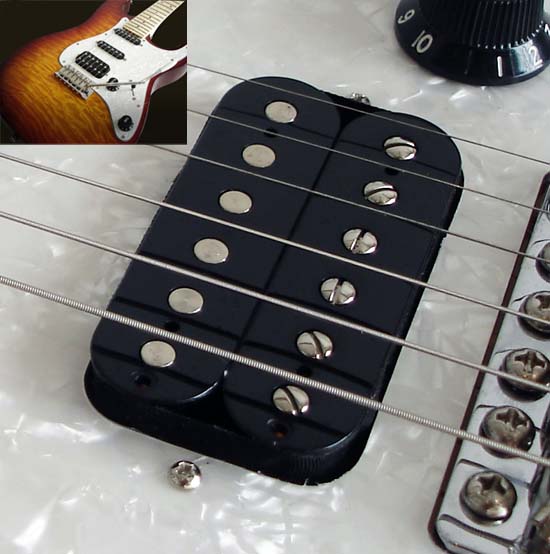 
The distance of a pickup from the strings determines the ability of the musician to influence the volume and dynamics of the instrument at the touch of a finger: 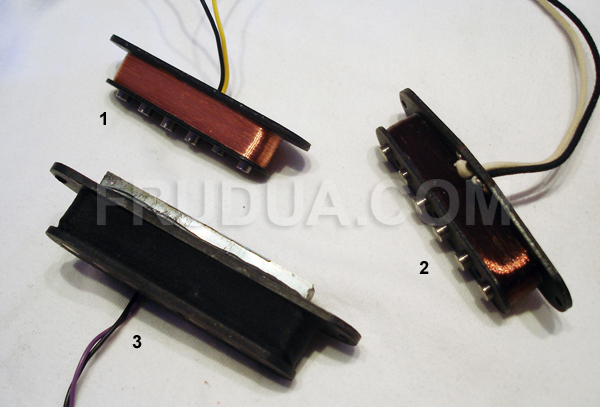 
The magnets used in pickups lose about one percent of their magnetic load when they are first played. In the first year after, on average, they lose another 1.2% of magnetization. From then on, they will lose 1% every several thousand years.

In humbucker pickups the coils can be paired side by side or on top of each other. This is called a stacked humbucker.

The stacked humbucker as a basic sound can be seen as a sensitively "inflated" single coil (some up to high levels of impedance and gain), but unlike a real single coil, it does not produce buzz.

There are many factors that affect the sound of a pickup, among them:

Among the factors that more influence the tone of a pickup we have:

All these factors greatly influence the sound of a pickup. Since these are magnets, the magnetic attraction of the pickups also affects sustain. Very powerful pickups placed too close to the strings will cause an interference on the vibration that will drastically reduce the duration of the note (sustain) and lead to "flanged" notes, which are scratchy. 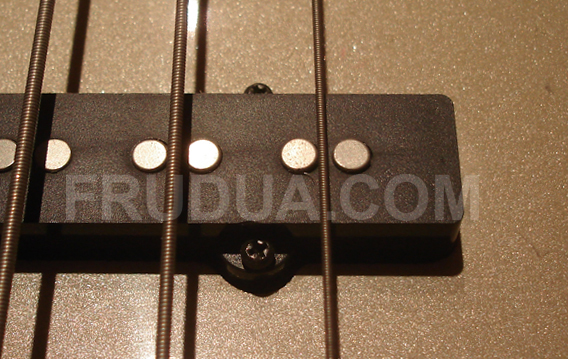 
The diameter of the magnet and its design also influence the sustain. For example, in Fender bass pickups, the string is picked up by two separate magnets. This design has made the fortune of the Jazz Bass in which we can all appreciate the attack more than the sustain.

In the first phase in which the fingers push on the string (slapping), the initial vibration is wider and is best picked up by the two spaced poles. 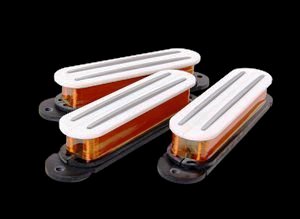 A set of Joe Barden pickups with blade rails magnets.


The initial attack is emphasized. As the sound decays, the vibration pattern becomes thinner and the string ends up vibrating between the poles instead of above them.

That's why we like the sound we get by "tearing" the strings off the Jazz Bass and why it has become so famous for its attack rather than its sustain.


This is not the case with single pole pickups and bar magnet pickups that are able to pick up the sound of the string directly underneath it until the end of its vibration.

The proximity of the pickup to the strings can also cause pitch problems. For this reason, during the process of tuning the octaves, it is advisable to check that the pickups, especially the one at the neck, are not too close to the strings as this could distort the tuner reading.

This phenomenon is recognizable by carefully observing the vibration of the string over the pickup at the neck. If we notice that at that point the string seems to vibrate flickeringly and unevenly as for the rest of its length, then the pickup is too close to the strings.

Other problems that pickups may present include uncontrollable audio feedback. These are often due to the unravelling of the coils or an autofrequency of a possible metal cover. This problem is solved by dipping the pickup in warm wax (potting), which is best left to experienced professionals and which removes 100% of air residues.

One last note: as the master piano makers teach us, the best place to pluck the string along its length is between one seventh and one sixth of its length. This position cancels out the dissonant effect of the seventh harmonic.

As a luthier and lutherie teacher, since 1988 he has been making about 350 boutique guitars and basses priced from 2,900 to 5,600 Euros and repaired and customized thousands of string instruments. His instruments and amplifiers are used by flagship artists, such as Chick Corea, Peter Gabriel, Ennio Morricone, Carl Verheyen. He owns two YouTube channels—where he teaches music—that count up to 21+ million views.